Calca is one of the least known towns in the Sacred Valley of the Incas. Despite this, it has tourist attractions that are pleasant to visitors such as: the thermal baths of Minas Moqo, the archaeological center of Ancasmarka, its main square and colonial church. Its climate is pleasant to tourists. Its festivities and people show cultural aspects of great tradition. Nearby you can visit other Inca towns and sites such as the famous Huchuy Qosqo. It is located 51 kilometers from the city of Cusco in Peru.

Calca is one of the least known towns in the Sacred Valley of the Incas. However, there you can enjoy a pleasant climate, thermal baths, museums and more. 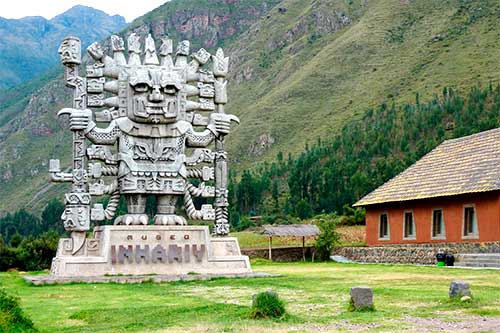 The Inkariy museum in the Sacred Valley exhibits panels, photos and sculptures of the cultures of Peru, from Caral to the Incas passing through Moche and... 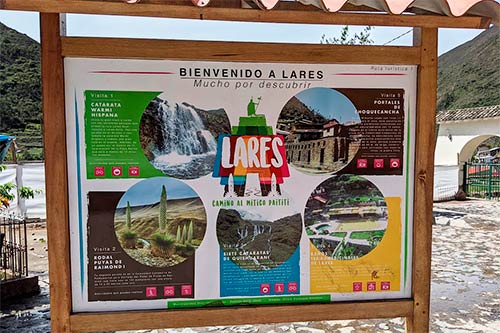 2. The town of Lares

Lares is in the province of Calca north of Cusco. Its main tourist attractions are its thermal baths and the Lares trek to Machu Picchu for 4 days.

Calca is the name of the town of the Sacred Valley of the Incas, also the capital of the province of the same name. The town has tourist services such as restaurants and lodgings. The Incas built colcas and platforms on the slopes of the nearby mountains. Most visitors pass through this town after their visit to Calca. Tourists who stop can enjoy its pleasant climate, its thermal baths, its Inca enclosures and the tradition of its inhabitants.

Calca is north of the city of Cusco, about 51 kilometers by road. It is one of the towns of the Sacred Valley of the Incas in Peru. It is also the capital of the province of the same name.

At what altitude is it located?

To get to Calca on your own you must take public transport in the city of Cusco. The minivans that depart daily from Puputi street have a cost of 5 Peruvian soles (approximately 2 US dollars). The trip takes approximately 1 hour 15 minutes. Follow the same road that goes to Sacsayhuaman and Pisac. Tours to the Sacred Valley of the Incas do not include a visit to the town of Pisac.

Map to get to Calca

Archaeological evidence indicates the presence of a pre-Inca people called Kallkas who settled in this territory before the Incas. It was the Inca Wiracocha at the beginning of the 15th century who conquered these territories and established his residence in Huchuy Qosqo, very close to Calca. According to the chronicles, these territories served as fields of cultivation. There is also evidence of enclosures such as Calispuquio and Urco. It is believed that the town was built during the Huáscar government, during the civil war with his brother Atahualpa in the middle of the 16th century.

During the Spanish invasion of Cusco in the 16th century, Calca was a strategic defense point for the army of the rebel Inca Manco Inca. The chronicles tell us that both Hernando Pizarro and Diego de Almagro failed in their attempt to conquer the lands. However, finally Calca was part of the viceroyalty of Peru. Viceroy Toledo turned it into a reduction of Indians at the end of the 16th century. These had to work the land and pay tribute to various encomenderos such as Melchor Maldonado, according to the documents of the time.

During the colony, the town or reduction of Indians of Calca was known as 'Villa de Zamora'. It was the liberator Simón Bolívar in 1825 who created the province of Calca. Later this town would become the capital of said province, which is also made up of the towns of: Coya, Lamay, Lares, Pisac, San Salvador, Taray and Yanatile. Today, Calca is one of the most important towns in the Sacred Valley of the Incas (territories of great importance in Inca times). It has Inca archaeological remains as well as thermal baths, restaurants and lodgings.

The thermal baths of Minas Moqo – These natural hot waters are located inside a recreational center. The waters, which help prevent rheumatic problems, come from a natural spring. The temperature of its thermal baths varies from 15ºC. up to 20ºC. This recreational center is located a short distance from the town of Calca. The cost of the entrance ticket is 2 Peruvian soles (0.6 US dollars approximately).

The thermal baths of Machacancha – These thermal baths are on the slopes of a mountain near the town of Calca (15-minute drive). The temperatures of its waters have a maximum temperature of 40ºC. They have therapeutic properties as they are ideal for people with rheumatism and digestive system problems. The cost of the entrance ticket is 5 Peruvian soles per person (approximately 2 US dollars).

Archaeological Center of Ancasmarka – In the high mountains of Calca, in the sector called 'Aqcha Alta', there is an archaeological site with Inca and pre-Inca buildings, a place little visited by tourists but with valuable buildings. Investigations indicate that there are more than 600 enclosures where walls, terraces, colcas, houses, platforms and more stand out. At the entrance there is also an exhibition of clothing made of alpaca fiber in a traditional way.

Huchuy Qosqo Archaeological Site – About 8 kilometers from Calca, on the top of a mountain, is the Huchuy Qosqo archaeological site, a Quechua word that means 'Little Cusco'. That place was an important Inca citadel where Emperor Wiracocha resided approximately at the beginning of the 15th century. It has platforms, enclosures, platforms, terraces, aqueducts and more. Time has destroyed a large part of this place, of which, however, important buildings still remain. You get there by car and on foot from Calca. Also through a hiking route of several hours from the city of Cusco.

From Calca you can go to different Andean towns and communities of Cusco. For example, there is the town of Lares (famous for its thermal baths). Also from there you can travel to the towns of Coya, Lamay, San Salvador, Taray, Yanatile and others. All these peoples preserve the typical multicolored clothing, the Quechua language (language of the Incas) and other very ancient practices.

The climate in Calca is pleasant to the visitor. The maximum temperature during the day can reach 25ºC. (77ºF). At night the cold can drop to 5ºC. (41ºF). The rainiest season runs from November to April. On the other hand, the dry season (hotter and colder) occurs from May to October. During the day there is a pleasant temperature for tourists.

Are there tours to Calca?

The classic 1-day tour to the Sacred Valley of the Incas goes through the town of Calca but does not stop. This tour does include a visit to the towns and archaeological sites of: Pisac, Urubamba, Ollantaytambo and Chinchero. Therefore, to visit Calca you need to go on your own.

Most tourists take public transport on Puputi street in the city of Cusco (trip of only 1 hour 14 minutes). The cost of the trip is only 5 Peruvian soles (0.6 US dollars approximately). And, once in Calca, they visit the tourist attractions of the city. During the route you can also visit the town of Pisac or taste the tasty 'Cuy al palo' in one of the local restaurants.

When visiting Calca do not forget to bring with you:

Calca is a town with many traditions. Many of the neighboring towns arrive there every day wearing their typical multicolored costumes. From this town it is also possible to appreciate the imposing Sawasiray and Pitusiray mountains. Therefore, it is a precise destination for photography lovers.

February is a pleasant month to visit Calca as the so-called 'Carnivals' are celebrated on Sundays. During these dates, games with water and talc are frequent, as well as typical dance competitions.

Every year on August 15, Calca celebrates the 'Feast of the Mamacha Asunta'. This religious celebration in honor of the protector of the people is recognized as 'Cultural Heritage of the Nation'. The celebrations include typical dances, food festivals, music and lots of joy. It is a great occasion for tourists to visit.

Calca does not have 5-star hotels but it does have comfortable lodgings where you can spend the night and enjoy the tourist attractions of the place. One of the biggest attractions are the local restaurants where you can try some typical dishes of Cusco such as: cuy al palo, baked pig, chiri uchu and more.

Lares is in the province of Calca north of Cusco. Its main tourist attractions are its thermal baths and the Lares trek to Machu Picchu for 4 days.