Yucay is one of the towns with the most history of the Sacred Valley of the Incas. There the Inca Huayna Capac had his palace built as well as huge groups of platforms and more. For many people, this small town has the best climate in all of Cusco. Few know that there you can also hike and enjoy good accommodations. It is only 4 kilometers from Urubamba, the capital of the province.

Learn about the pleasant climate, the traditions and customs of the town of Yucay, one of the towns preferred by the Incas in the 16th century. 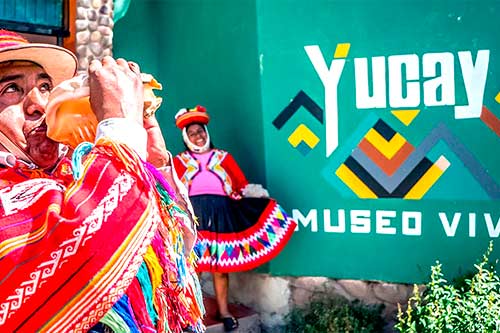 The museum shows some of the customs of the peoples of the Sacred Valley of the Incas such as: their textiles, their gastronomy, their drinks, ceramics and...

Yucay is a little known town in the Sacred Valley of the Incas. However, this small town enjoyed great importance during the Inca period, where it was chosen as the area of ​​residence of the Inca Huayna Cápac as well as the Inca Sayri Túpac in the 16th century. Its climate is pleasant to the visitor. Its landscapes are beautiful. There, in addition to visiting the Inca archaeological sites, you can make short walking routes.

Yucay is located 63 kilometers by road northeast of the city of Cusco. This town belongs to the so-called Sacred Valley of the Incas, in the province of Urubamba. Geographically, it is located on one side of the Vilcanota River (also called Urubamba). At the top you can see the snowy Chicón and San Juan. It is recognized as 'The capital of the Sacred Valley of the Incas'.

How high is it?

Yucay is almost 63 kilometers away by road from the city of Cusco. This route follows the road that also runs through the towns of Chinchero and Urubamba.

Map of the route to Yucay

Yucay was a fertile territory appreciated by many families or human groups who were annexed to the empire of the Incas approximately in the 15th century. Due to its fertile lands and good climate, the Incas built several sets of terraces as well as palaces for the privileged class. One of its most important buildings is the one commissioned by the Inca Huayna Capac at the end of the 15th century. It is believed that for this work he used 3,500 men from various corners of the empire.

After the Spanish invasion of Cusco in the mid-16th century, Yucay was the scene of fierce struggles between Europeans and Incas for control of this fertile valley. There Manco Inca kept the fight until he was defeated and had to retreat to the Vilcabamba jungle from where he continued fighting for many more years. His son and successor Sayri Túpac agreed to a peace with the Spanish in exchange for the lands of Yucay and other privileges. There he had his palace built until he died mysteriously, probably due to poisoning.

During the colony, Yucay was an important 'encomienda' dominated by Spanish landowners. According to documents of the time, in the 16th and 17th centuries the so-called 'Yucay Valley' was integrated not only by the current town of Yucay but also by the towns of Maras, Yanahuara, Urubamba, Chichubamba, Huayoqari, Huayllabamba and Urquillos, all which were part of the Sacred Valley of the Incas. The liberator Simón Bolívar stayed in this town in 1823. In 1905 the town of Yucay was elevated to the category of district. Today, it is a tourist town. Its two squares are famous, on the sides of its church of colonial origin. It is recognized as 'The capital of the Sacred Valley of the Incas'.

Yucay is very close to Urubamba, one of the most famous towns in the Sacred Valley of the Incas. To get there you can take one of the buses that leave every few minutes from Urubamba. The cost of the ticket does not exceed the sum of 1 Peruvian sol (0.3 US dollars). Another more adventurous option is to go walking (approximately 30 minutes of walking). There are still few tourists who visit this magical town.

The town of Yucay is full of a set of Inca terraces. It is believed that 75% of the old town was made up of these terraces made for agriculture. 'Pacaypata' is one of the most famous. It is located in the Hatun Ñan and Tenerías canals sector. This platform is one of the largest in Cusco: it is 5 meters high and up to 100 meters long. It has stairs on the sides to access the next levels.

In one of the terraces sectors (in the so-called Antibamba de Yucay portal) there is a rock formation with traces of many years old, according to the Inca worldview, it represents the three levels or worlds: the Hanan Pacha (world above or from the gods), the Kay Pacha (earthly world or of living beings) and the Uku Pacha (lower world or of the dead). This rock formation is 17 inches wide and long. It is believed that there is a space where the hand can be placed.

One of the most famous tourist attractions in Yucay is the palace of the Inca Sayri Túpac, which is located in the same town. This archaeological site has walls, murals with niches and a simple building like an oven. Some of its structures are destroyed by the passage of time, but the exquisite architecture of its building is still appreciated. It is also known as the 'Huaca Huasi'.

The Saywa sector in Yucay is famous for preserving a set of cave paintings from an antiquity prior to the Inca period (up to 4 thousand years before). Fossil remains, ceramics and tools were also found in the place. These cave paintings are located near the 'Capillayoq' area on the Saywa mountain cliff. You can get there walking from the town of Yucay, with the indications of a local resident.

The beautiful landscapes and mountainous territory of Yucay is a perfect setting for hiking. For example, its short route to the Inca walls is famous. During this simple walk you will see cultivated fields, gutters made from Inca times and Andean-style houses. There is also a demanding route to the heights of the snowy San Juan at the top of the town. This route can last up to 4 hours and must be done with locals or guides who know the way well.

According to the people of Cusco, Yucay has one of the best climates in the Sacred Valley of the Incas. The maximum temperature can reach 23ºC. (73.4ºF). while the minimum temperature can drop to 6ºC. (42.8ºF). The season of greatest rainfall occurs from the months of November to April. The less rainy seasons occur from May to October.

Are there tours to Yucay?

The 1-day tours of the Sacred Valley of the Incas do not include Yucay as a tourist attraction. The best way to get to know this small town is to go on your own.

To go to Yucay on your own you must take public transport to the town of Urubamba (the trip by minivan has a cost of 10 Peruvian soles, or about 3 US dollars, approximately). From this town you must take another transport to the town of Yucay (this other route also has a cost of 1 Peruvian, or 0.3 US dollars on average). In total, the trip takes almost 2 hours.

Once in the town of Yucay, the tourist can stay in one of the hotels on the site. You can visit the tourist attractions of the town. Or simply walk the historic streets of the place. All these visits can be done on your own, without the need for a tour.

Yucay is one of the towns that has one of the most luxurious hotels in Cusco. It is the 'Sonesta Posada del Inca de Yucay' hotel, which was built on the foundations of the old Santa Catalina monastery. The hotel has up to 88 luxurious rooms in the middle of one of the most beautiful landscapes of the Sacred Valley of the Incas.

The name Yucay comes from a Quechua word that would mean 'deception or charm'. The reason for this name is not known. According to the chroniclers, this town was the most welcoming of the entire Sacred Valley due to its fertile lands and its good climate.

If you travel to Yucay, don't forget to bring a hat or cap with you to protect yourself from the heat during the day. At night it is always good to bundle up. The cold is not as intense as in the city of Cusco but it is always good to bring a windbreaker. Also, do not forget to bring a poncho in case of rain, some good shoes to visit the town, your personal documents and a little cash in case you need to make a purchase.

In Yucay the altitude is not as high as in the city of Cusco. It is still good to drink plenty of water (a good option is the coca leaf tea). Thus you can reduce the symptoms of the famous 'altitude sickness'. These discomforts usually disappear within a few days of arriving in a mountainous geography.