Quillabamba is a different alternative to the trip to Cusco and Machu Picchu. This city located in the jungle part of the Andean region offers a warm and refreshing climate. That is why it is recognized as the 'City of Eternal Summer'. It has a beautiful geography, full of waterfalls, trees, caves, rivers and much more. It is also famous for its coffee and cocoa, one of the best in Peru. Despite its many tourist attractions, not many tourists come to this place as it is more than 200 kilometers by road from the city of Cuzco.

Dare to know the largest city in the Cusco jungle. Get to know its tourist attractions, waterfalls, typical foods and traditions of this hot town. 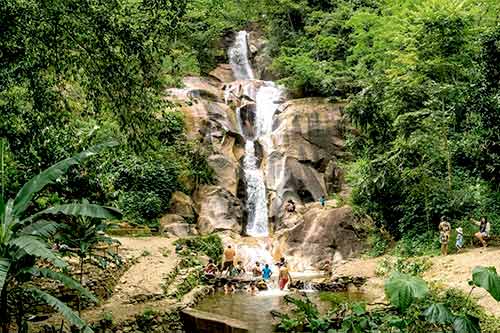 This tourist attraction is in Quillabamba (jungle of Cusco). It has a waterfall in whose wells (jars) and rock formations stand out petroglyphs.

Quillabamba is a city, capital of the province of La Convencion, in the Cusco region of Peru. Unlike the capital of Cusco, it has a tropical climate full of trees, rivers and waterfalls. It is recognized as the 'City of Eternal Summer'. It has natural tourist attractions such as its Yanay, Illapani and Siete tinajas waterfalls. It is also recognized for its excellent coffee and cocoa. Many residents of the city of Cusco come there to enjoy its sun and its nightlife.

Quillabamba is located in the eastern part of Cusco, in the high jungle of Peru. It is the capital of the province of La Convencion. It is located about 204 kilometers by road from the city of Cusco.

Quillabamba is 1,050 meters above sea level (3,444 feet altitude). Geographically it is located next to the Vilcanota river, at the gates of the National Sanctuary of Megantoni.

To get to Quillabamba, you must follow a 204-kilometer drive from the city of Cusco. This route crosses the Sacred Valley of the Incas, climbs the high Andean mountains and descends into the jungle of Cusco. The trip lasts 4 hours 27 minutes on average.

To get there by public transport you must board one of the buses that leave from 'Avenida Antonio Lorena'. The cost of the trip in the company 'Turismo Ampay' is approximately 15 Peruvian soles (5 US dollars).

Map of the route to Quillabamba

Quillabamba was for many centuries a territory inhabited by ethnic groups (family groups), such as the Mañaríes, Pilcozones and Izcazingas and Matsiguengas. In the middle of the 15th century, this territory was annexed to the Inca empire although it maintained much of its own culture, such as the commercialization of the coca leaf, considered sacred by the Incas. As proof of this, it is still possible to appreciate the archaeological sites of Vitcos and Vilcabamba, located a few kilometers from Quillabamba.

The territory of the province of La Convencion was the scene of hard battles between the Spanish invaders and Inca rebels (between 1537 and 1572). During the Spanish colony (from 1542 to 1824), Quillabamba, also known as Wilcapampa Yunca, was the destination of many evangelizers of Christianity who sought to change the faith of the natives. The reductions of Indians produced mainly fruits, coca leaves, sugar cane as well as coffee and cocoa.

In 1857 the province of La Convencion was created with its capital Quillabamba, which was then called 'La Villa de Quillabamba'. During the 20th century, this place was the scene of peasant demonstrations for the so-called 'Agrarian Reform', which finally took place. Also famous is the train route Cusco - Quillabamba, which was destroyed by the rains, leaving only the route that connects the imperial city with Machu Picchu. Today Quillabamba has several tourist attractions such as the Yanay, Illapani and Siete tinajas waterfalls. It is famous for its coffee and cocoa crops and its pleasant climate for visitors.

Quillabamba is located about 67 kilometers by road from the famous archaeological complex of Vitcos, one of the main points of resistance for Manco Inca and the rebellious Incas of Vilcabamba. Precisely, following a hiking route from there, you reach the famous Vilcabamba, the last refuge of the Incas in the jungle of Cusco. Both sites can be visited with an all-inclusive multi-day tour.

One of the most popular tourist attractions in Quillabamba are these several meter high waterfalls surrounded by natural landscapes of great beauty where visitors can cool off. These waterfalls are located in the district of Echarate, in the city of Cusco. You can get there by taking a 30-minute transport trip. Then you must continue with a 30-minute walk to this place.

Siete Tinajas is a waterfall of several meters and levels where several pools of water ideal for cooling off (its name is due to the fact that there are 7 pools that are formed by this waterfall). On a slope that leads to the top of the waterfall, petroglyphs that are many years old can be identified. You can get there by taxi or public transport from Quillabamba (approximately 20 minutes).

This recreational center is located next to the Vilcanota River, in the town of Quillabamba. It has swimming pools, green areas, sports fields, food stalls and more. The majority of visitors are the local population, although foreign tourists also arrive. It is one of the most famous attractions of the place. You can get there on foot (for about 15 minutes) or by public transport. It is recommended to visit it in the dry season months (from April to October).

Quillabamba has numerous municipal swimming pools where it is possible to cool off from the intense sun of the place. Some of these are: the '7 de Junio' pools, the 'Señor de Torrechayoc' pool, the 'Parque infantil' pool, the 'Municipal de Quillabamba' pool and the 'Sambaray pool'. The cost of admission is very cheap. Although it does not have slides and large infrastructure, it is an excellent option during the visit.

There are many native communities in the province of La Convencion. Many of them exist from times before the Incas, such as: the Matziguengas, the Ashanincas, the Piros, the Nahuas and the Kugapakori. Many of these human groups inhabit the national reserves protected by the Peruvian State. There is even an ethnic group with cannibalistic practices such as the Mashcos. Some groups are organized to receive visitors.

Restaurants and nightlife in Quillabamba

Quillabamba has a nightlife that attracts its visitors, mainly the residents of the city of Cusco. Some of the most recommended clubs are 'Extreme', 'Entre Copas' and 'Aruca Discoteca'.

The town also offers various restaurants, which offer dishes other than the city of Cusco, typical of its region such as the famous 'Puchero'. Some of the most recommended restaurants are: the 'Restaurant Marabi', the 'Fundo La Colmena' and 'Restaurante Vichayito'.

Quillabamba has a hot climate due to its location in the high jungle of Cusco. During the day the maximum temperature can reach 30ºC. (86ºF). while at night the temperature can drop to 14ºC. (57.2ºF).

Quillabamba has a great diversity of flora and fauna, typical of the high jungle region of Peru. Its coffee plantations, sugar cane, fruits (mango, orange, banana, papayas, custard apple, coconuts) and cocoa cultivation stand out. Its orchids and vegetables are also famous. The famous coca leaf is also planted there.

Among the species of birds and animals that inhabit the Quillabamba region are famous: the spectacled bears, the cock of the rocks, macaws, monkeys, toucans, many varieties of insects and more.

What should i bring?

In the city of Cusco there is not much offer of tourist packages to Quillabamba. Perhaps one of the most commercial routes is the multi-day tours to Vilcabamba and Vitcos, the last refuges of the Incas. The best way to get to know Quillabamba is to go on your own.

To get to Quillabamba from the city of Cusco, the best option is to take public transport on 'Antonio Lorena' avenue, located 15 minutes from the city center. There the buses of the company 'Ampay' depart whose cost for the trip is only 15 Peruvian soles (5 US dollars approximately). The journey takes 4 hours 24 minutes on average.

Once in Quillabamba, the visitor can choose one of the tours that are located in the vicinity of the Main Square of the place. The most popular tour packages are to the reserve of Megantoni, Echarati and others. It is also possible to visit its pools, waterfalls and other tourist attractions on your own.

Quillabamba is the capital of the Province of La Convencion where you can also visit many tourist attractions such as the 'National Sanctuary of Megantoni', which has impressive landscapes little explored even by its own inhabitants. One of its most famous destinations is the 'Pongo de Mainique'. You can make your visit with a local tourism agency.

46 kilometers from Quillabamba is the famous thermal baths of the town of Santa Teresa, called 'Cocalmayo', considered the best in Cusco. It can be reached by public transport. This town is famous because it is part of the adventurous route to Machu Picchu (includes a 2 hour walk). It is only 6.5 kilometers in a straight line from the Inca city.

Quillabamba is world famous for its excellent cocoa and coffee. In the fields surrounding the city there are farms that produce this product. The owners gladly welcome visitors who try ice cream, chocolates and other products derived from cocoa and coffee. You can visit any of these places, either with a local tour or on your own.

Quillabamba is located in a tropical region where, unlike the city of Cusco, the effects of altitude sickness are not felt. Of course, it is important to carry sunscreen and mosquito repellent with you. Especially if you take a walk through the fields of the place.

During the rainy season (mainly in January, February and March), some sections of the roads that lead from Cusco to Quillabamba tend to flood and fall off as a result of the heavy rains. It is recommended to take special care at this time of year. The best time to visit this place is definitely in the dry season: from April to October.

Pisac is an Inca archaeological site in the Sacred Valley of the Incas. It is only 1 hour from Cusco. The town also offers a famous artisan market.

Yucay is a town in the Sacred Valley of the Incas famous for its pleasant climate, the ancient palace of the Incas Huayna Capac and Sayri Túpac and much more.