Ollantaytambo is one of the most popular destinations in the Sacred Valley of the Incas. This famous town enjoyed great importance during the empire of the Incas. There the emperor Pachacutec ordered the construction of a fortress and a very important ceremonial center, which was the scene of the battles between the Incas and the Spanish. Today, it is very visited by tourists who come to Cusco. The trains that go to Machu Picchu depart from there. The town has restaurants, hotels, cafes and various services for visitors.

Ollantaytambo is one of the most famous towns in the Sacred Valley of the Incas. It stands out for its impressive archaeological site, the Catcco museum and much more. 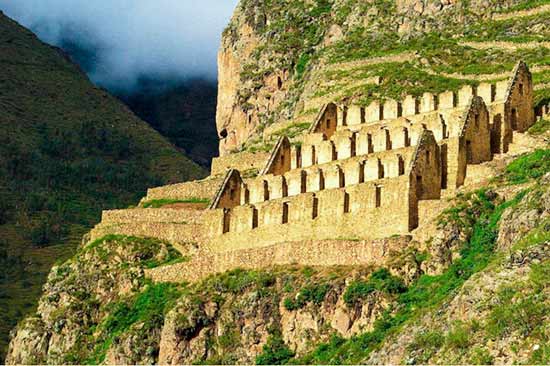 This archaeological site has structures as imposing as Machu Picchu. It is located in the town of Ollantaytambo, in the Sacred Valley of the Incas. 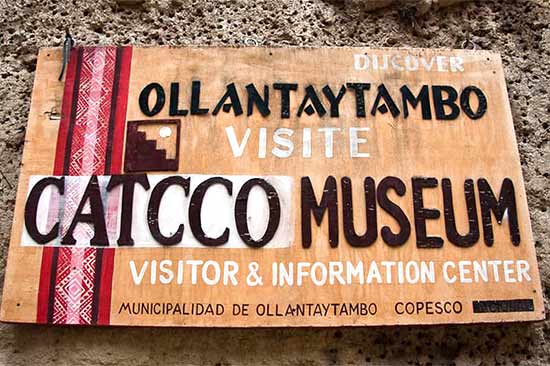 The museum exposes the history of the town of Ollantaytambo, famous for its archaeological site and beautiful crafts. It is located in the Sacred Valley of the...

Ollantaytambo refers both to the Inca archaeological site that was built in the Sacred Valley of the Incas, and to the town that was founded during the Incan at the foot of this building. Today, it is a town that receives hundreds of tourists every day. It is a place of great importance since most of the train services to Machu Picchu depart from there. Therefore, the town offers a diversity of restaurants, hotels, cafes and other tourist services. Its streets, crowned by the archaeological site on top, merge buildings of its Inca and colonial ancestors. It is the only town in Peru that preserves its original Inca urban design.

What does Ollantaytambo mean?

Ollantaytambo comes from an Aymara word (language of the communities that inhabit the highland region of Peru and Bolivia) which means 'Site of observation from below'. The name is due to the fact that the Inca fortress of this town is located in the foothills of the imposing mountains of the Sacred Valley of the Incas.

Where it is located?

Ollantaytambo is in the extreme north of Cusco, in the Sacred Valley of the Incas. It is 61 kilometers by road from Cusco, the capital of the Inca empire. It belongs to the province of Urubamba. It is located at an altitude of 2,792 meters above sea level (9,160 feet).

Map to get to Ollantaytambo

You can get to Ollantaytambo by a road trip that crosses the Sacred Valley of the Incas and lasts almost 2 hours. The fastest route follows the town of Chinchero, although it can also be reached by following the route that runs through the town of Pisac. Although there is a rail line to get there, most use this means of transport to get directly to Machu Picchu.

A good economical option to visit Ollantaytambo is to take public transport. In Pavitos street (just 15 minutes walking from the city square of Cusco) are minivans that for only 10 Peruvian soles, about 3 US dollars approximately, will take you on a trip of almost 2 hours to the town and station of Ollantaytambo train.

Ollantaytambo was a land of human groups that were conquered by Emperor Pachacutec in the 15th century. It was the Inca ruler who ordered the construction of the citadel as well as the huge checkpoints, warehouses and platforms for subsistence. The Inca himself and his family established their temporary residence in the place.

With the arrival of the Spanish in Cusco in the 16th century, the Inca rebels fled the city of Cuzco and established their defense in the fortress of Ollantaytambo. The battles between the Incas and the Spanish there were of dire consequences for the current archaeological site, which was severely damaged in many of its structures. Despite the victories, Manco Inca decided to flee to Vilcabamba, an Inca region in the jungle of Cusco. Then, Ollantaytambo passed into the hands of the Spanish, entrusting itself to Hernando Pizarro.

Despite the passage of time, Ollantaytambo maintained many of its Inca structures, on whose bases colonial-style walls were built. Today, the town maintains its Inca urban structure. Its streets are narrow, just as the Inca engineers planned. Its population keeps alive many of the traditions of its ancestors. For all this, it is one of the most visited tourist destinations in the Sacred Valley of the Incas.

The drama of Ollantay
Ollantay drama is a drama written in colonial Quechua that survived time. It is believed to be of Inca origin. It deals with the history of the Inca general Ollantay, who due to his plebeian origin could not take Cusi Coyllur, daughter of the Emperor Pachacutec, as his wife. Then the Inca princess is imprisoned and Ollantay rebels making her defense in Ollantaytambo. After many years of battle, Pachacutec dies and his son and successor, Túpac Yupanqui forgives Ollantay and his sister Cusi Coyllur, letting them unite.

The temple of the Sun

This enormous construction was part of a solid enclosure that must have been dedicated to the cult of the sun. Today, only six pieces remain that together form a wall assembled with surprising accuracy. The temple of the sun was the most important religious building in Ollantaytambo.

Structure in the form of a fountain where the water reached for cleaning purposes. It is made up of a triple janitor sculpted on the front face. It has three water outlets. It must have been the personal bath of the Inca or some important figure of the Inca aristocracy.

The royal house of the sun

Structure formed by a set of walls and surfaces superimposed one on top of another that welcome the place. It is made up of up to seventeen large structures, all in the direction of the town. It is the first structure that the tourist looks at when entering Ollantaytambo, which impresses with its design.

The monumental portal - the enclosure of the 10 niches

The monumental portal, as its name indicates, is the entrance door to the complex of Ollantaytambo. It is located in the upper part, at the end of the set of the royal house of the sun. The cover is semi destroyed in one of its corners. The set of 10 niches is a wall made up of up to ten niches, types of windows where precious stone ornaments were placed. It is one of the most famous structures in the area.

Set of walls and windows located outside the archaeological site of Ollantaytambo, 2 kilometers away. It served as a lookout and checkpoint. It had enclosures that served as 'colcas' warehouses, water tanks and structures for surveillance.

The main square of the Inca site of Ollantaytambo. It has a rectangular shape. The neighboring walls have niches and doorways. It would have had a religious function. It is located on the right side of the Patacancha stream. Its name means 'Petition Square'.

The town of Ollantaytambo was originally designed by the Incas with its characteristic narrow streets and stone walls. With the arrival of the Spanish, the town acquired a main square, a church, and colonial structures. Today, it merges both structures, the Inca and the colonial, and added modern structures. All this attracts the curiosity of the visitors. However, its great attraction is the archaeological site of the ancient fortress of Ollantaytambo, a place of enormous Inca walls, platforms and temples. With the arrival of the train station, tourism grew exponentially. Today it offers dozens of lodging services, restaurants, bars and much more. Other tourist attractions are: the Catcco museum, the Pinkuylluna archaeological site, the Perolniyoc waterfalls and the Yanacocha lagoon.

The train that departs from the Ollantaytambo station is the one with the most daily departures to Machu Picchu. It is located at the end of the town, right on the bank of the Vilcanota River. It is estimated that 20 train services depart from there daily. The trip to the Machu Picchu town station takes approximately 1 hour 40 minutes. The station has a ticket office and cafeteria. Thanks to this station, thousands of tourists arrive a day, many of them stay to learn more about the town.

The 1-day tour to the Sacred Valley of the Incas includes a visit to Ollantaytambo and has a cost of approximately 70 US dollars. It also offers a visit to other archaeological sites such as Pisac and Chinchero. The tour includes everything you need for the trip: complete transportation, entrance to all the sites, tour guide service as well as buffet lunch in the town of Urubamba.

To visit Ollantaytambo on your own you must get the 'Partial Cusco Tourist Ticket', which has a cost of 70 Peruvian soles (22 US dollars, approximately). In addition, the tourist must get transportation on their own (public or hired), tour guide (at the entrance of the archaeological site).

The Ollantaytambo archaeological site is open to the general public every day of the year from 7 am to 6 pm.

When is it better to go?

According to the experience of other tourists who have visited Ollantaytambo, the months of April, May, June and July are the best to visit the archaeological site. During those days, it is rare that it rains, so the visitor can visit each place without inconvenience. The months with the most rain are: January, February and March.

Just 15 kilometers from the town of Ollantaytambo, at kilometer 82 of the railway that connects this town with Machu Picchu, is the starting point of the famous 'Inca Trail'. This hiking route lasts 4 days and 3 nights and ends in the Inca city of Machupicchu.

If in Cusco the famous 'Inti Raymi' (festival in honor of the sun god) is celebrated every June 23; In Ollantaytambo, a few days later, the 'Ollantay Raymi' is celebrated where hundreds of actors stage the famous drama of 'Ollantay'. Both events attract many tourists.

In Ollantaytambo, especially in the archaeological site, the winds hit hard. Therefore, in addition to the recommended clothing, it is a good idea to wear a scarf or a sweater or jacket to protect you from the winds.

If you make your visit on your own, take advantage of visiting the other archaeological sites of the Sacred Valley of the Incas such as: Pisac, Chinchero and the town of Urubamba. Remember that all tours include a visit to these tourist attractions.

Many tourists make a 2-day visit where the first day they visit the archaeological sites of the Sacred Valley of the Incas including Ollantaytambo. That night they stay at a hotel in this famous town, so, on day 2, they take the train very early and go to Machu Picchu.

Maras is a traditional town in the Sacred Valley of the Incas. Its main attractions are the salt mines of Maras and the circular platforms of Moray.

Yucay is a town in the Sacred Valley of the Incas famous for its pleasant climate, the ancient palace of the Incas Huayna Capac and Sayri Túpac and much more.