Chinchero is one of the most visited tourist attractions in the Sacred Valley of the Incas. It was the palace of the Inca Túpac Yupanqui, one of the most important emperors. With the arrival of the Spanish, the palace was destroyed. In its place a colonial church was built. The settlers still maintain many of the customs of their Inca ancestors. One example is women's red and black clothing. There it is possible to visit dozens of textile centers. On Sundays there is a market in the town square. You can even practice adventure sports.

In the town of Chinchero you can find churches, archaeological sites, textile centers and a lot of culture and traditions. It is located at the top of the Sacred Valley of the Incas. 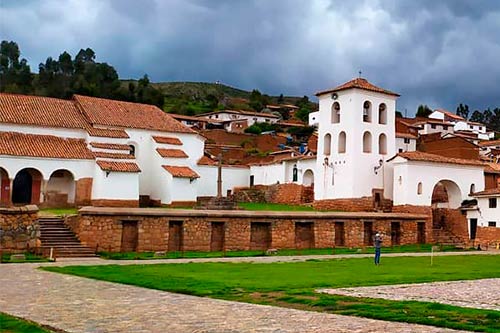 Chinchero is famous for its archaeological site, the ancient palace of Túpac Yupanqui. To visit it, you must buy a tour or the Cusco Tourist Ticket. 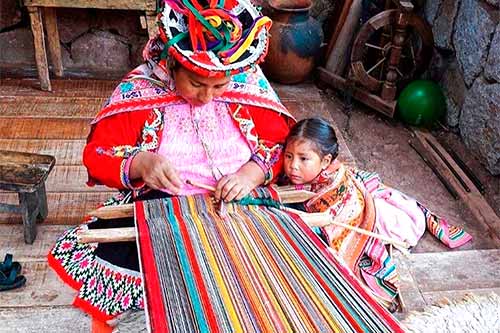 In Chinchero there are dozens of textile centers where llama and alpaca garments are woven and dyed in a traditional way. It is part of the tour to the Sacred...

Chinchero is a town and archaeological site of Cusco. It is famous for the typical clothing of its population. Especially of the women who wear black skirts and red blankets with filigree of various colors. At the end of the 15th century it was the residence of the Inca emperor Túpac Yupanqui. There, the Spanish and the Incas also fought for control of Cusco. Currently, its archaeological site is almost completely destroyed although it preserves the platforms and walls of the Inca palace. Tradition and color characterize this town in the Sacred Valley of the Incas. It is known as the "City of the rainbow", because there it is easy to observe this natural phenomenon.

Where and at what altitude is it located?

Chinchero is located 30 kilometers north of the city of Cusco. It belongs to the province of Urubamba, Cusco - Peru. It is the highest town in the Sacred Valley of the Incas. It is located at 3,754 meters above sea level (12,316 feet). The town is surrounded by two lagoons called Huaypo and Piuray. The latter supplies drinking water to the city of Cusco.

Map to get to Chinchero

The history of Chinchero

Archaeological investigations indicate that Chinchero was inhabited before the Incas by the 'Ayamarcas' who established and defended their residence there against the expansionist plan of the Incas. They were finally annexed to the empire. Due to its location in the upper part of the Sacred Valley, it was an important point for agriculture. At the end of the 15th century, the emperor Túpac Yupanqui built and established his residence there.

In 1533, when the Spanish settled in Cusco, Chinchero was an important point for the Inca defense. It was there that the rebel Manco Inca settled to fight the Spanish. However, before the onslaught of the Europeans, he had to flee, setting fire to the town so that the Spanish would not renew their supplies. When the colony was established, Chinchero became a reduction of Indians. The Túpac Yupanqui temple was looted and destroyed. In its place a colonial church was built that remains until today.

The indigenous leader Mateo Pumacahua, born in Chinchero, fought in favor of the Spanish crown, during the revolution of Túpac Amaru II (1780 - 1781). However, time later he revealed himself and fought for the independence of Peru. Today, the archaeological site of Chinchero, despite its deterioration, is visited by many tourists. In 1972 it was declared a Historical Heritage of Peru. The population maintains the clothing of their ancestors. Likewise, the town is famous for its dozens of textile centers.

The archaeological site of Chinchero was one of the most important sites during the Inca Empire. However, due to the destruction caused by the Spanish and Manco Inca himself during the wars between the Incas and Europeans; the place is semi destroyed. The entire place covers about 43 hectares, most of it made up of platforms and cultivation areas. The main temple, the palace of the Inca Túpac Yupanqui, was converted into the church of 'Nuestra Señora de Monserrat'. It is still possible to see the Inca bases and walls made in triple jamb with polished rock. You can also see some 'huacas' or shrines.

On the outside, the many platforms formed one on top of the other stand out. In the center there is a wall made with niches that would have served to carry out the religious ceremonies in Chinchero. In 2018, after a research work, more Inca platforms and walls were found on the bases of houses in the town. That is why it is believed that a large part of the current town is located on the ruins of the ancient Inca town of Chinchero.

The town of Chinchero

The town of Chinchero is one of the most picturesque in the Sacred Valley of the Incas. It is a place of many traditions, where you can still observe some practices whose origins date back to Inca times. Perhaps the most striking thing is the typical clothing of its inhabitants (especially on Sundays when a fair takes place in the square). In the place there are up to 12 communities or organizations that zealously follow ancestral practices such as the election of the 'Varayoc' (head of the community).

On Sundays there is a fair in the town where you can buy handicrafts and food. You can even exchange products, like many years ago. In the town, its textile centers stand out, where alpaca garments are made woven and dyed with natural products, as their ancestors did. Quechua (the language of the Incas) is still the most widely spoken in the town. The most important dates are the carnivals (late February and early March) and the election of the 'Varayoc', every January 1.

If you visit Chinchero you will surely come across some of the many textile centers. There it is possible to appreciate the lifestyle of its inhabitants, their clothing, domestic animals and more. Above all, you will learn about the process of weaving and dyeing garments made of alpaca, sheep and other fibers using natural wool and natural dyeing products such as cochineal.

Most tourists come to these textile centers through an all-inclusive tour of the Sacred Valley of the Incas. However, there are also visitors who come on their own. They just have to get to the town of Chinchero and go to the textile centers. In the end, you will be able to purchase a product woven by the artisans.

The lagoons of Chinchero

Chinchero stands out for its beautiful landscapes full of fields, snow-capped mountains and mountains. However, its most famous landscapes are its two lagoons: Huaypo and Piuray. Its blue waters are home to many fish such as trout or silverside. Along with its waters you can appreciate the snow-capped mountains that surround the Sacred Valley of the Incas: Salkantay, Soray, Verónica. Since the time of the Incas and until today, the Piuray lagoon supplies water to the city of Cusco.

The legend of the lagoons of Chinchero
Legend has it that the sun god asked his son, the Inca Manco Capac, to have his twin sons attend his deathbed. When the time came, both sons set out on their journey but were turned into lagoons. The male child became the Huaypo lagoon. The daughter became the Piuray lagoon.

How much does it cost to go?

All 1-day tours to the Sacred Valley of the Incas include a visit to the town and archaeological site of Chinchero. These tour packages also offer visits to other attractions in the valley, such as Pisac, Ollantaytambo and Urubamba. They also include a buffet lunch, transportation, tour guide and everything you need for the trip. It has an approximate cost of 75 Peruvian dollars per person.

Another option is to go to Chinchero on your own. To do this, you only have to take one of the public transports that leave from 'Pavitos' street. The cost of the trip is approximately 10 Peruvian soles '3 American dollars'. After 40 minutes of travel, you will arrive in this town where you can visit its archaeological site, its church, its textile centers or simply appreciate its landscapes.

The archaeological site of Chinchero serves tourists every day from 7 in the morning until 6 in the afternoon.

Chinchero is one of the coldest towns in the Sacred Valley of the Incas. During the day the heat can reach a temperature of 22 degrees Celsius (71.6ºF). At night the cold can reach 0 degrees Celsius (32ºF). January, February and March are the rainiest months. May, June, July and August are the coldest months with little chance of rain.

Facts you should know

Near the town square is the Chinchero site museum, a place that keeps some of the pieces found during excavations at the archaeological site of the place. It consists of two saldas where some ceramic pieces, tools as well as a demonstration of the typical costumes of the place stand out.

The colonial church of Chinchero receives the name of 'Our Lady of Monserrat' and was founded in 1607. There the 'Virgin of the Nativity' is venerated, whose main altar is decorated with gold leaf. Also noteworthy are the paintings of the artists of the famous 'Cusco School' founded during the colony.

If for any reason you are going to spend the night in Chinchero, do not forget to bring warm clothing. The temperature at night can drop to 0 degrees Celsius, especially during the months of May, June, July and August.

Due to the high altitude of Chinchero (3,762 meters above sea level), it is common for you to feel some of the symptoms of altitude sickness (nausea, fatigue). You can reduce these symptoms by drinking plenty of water. Especially coca tea, an infusion made from the coca leaf.