Canchis is one of the thirteen provinces of Cusco. Its territory was inhabited by the Canchis culture, who allied themselves with the Incas in the fifteenth century. In this territory there are important archaeological remains. However, what stands out the most in this province is Vinicunca, the mountain of 7 colors. Many tourists visit this place, considered the second most popular in Cusco after Machu Picchu. Learn more about the province of Canchis, its location, climate and attractions.

All about province of Canchis

Explore the province of Canchis

Canchis is a Cusco province with a lot of history and natural landscapes to visit. There is the second most visited tourist attraction in all of Cusco: the amazing mountain of 7 colors. Learn more about this province! 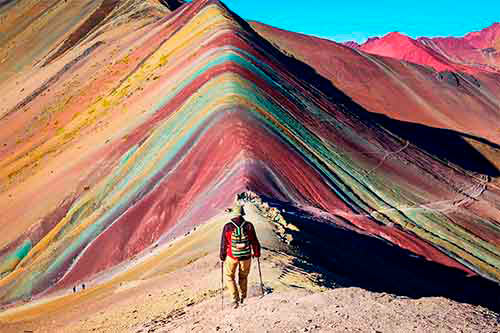 The mountain 7 colors was discovered in 2015. It is more than 100 kilometers from Cusco in Peru. Its mineral soil has colors similar to rainbows. 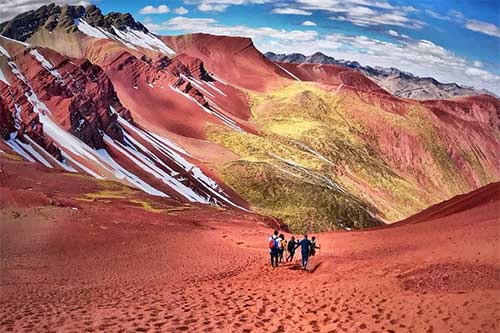 2. The red valley of Pitumarca

The red valley of Pitumarca is a new tourist attraction in Cusco. It is 5,000 meters high. It is famous for its red mountains of mineral spring.

The red valley of Pitumarca 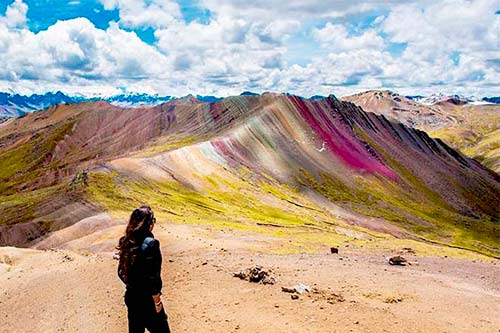 3. The mountain seven colors of Palccoyo

The mountain seven colors of Palccoyo is south of Cusco. The tour includes a 2 kilometer walk. Also a stone forest and adventurous option.

The mountain seven colors of Palccoyo 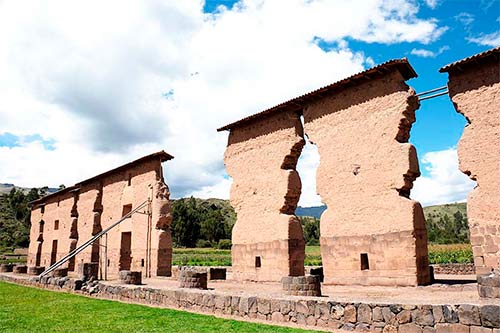 Racchi was an Inca citadel south of Cusco. The temple of Wiracocha, the highest wall in the entire empire, is famous. The entrance costs 10 Peruvian soles.

The Andean valley of Canchis

Canchis is one of the thirteen provinces of Cusco, one of the most touristic. It is located south of Cusco. It is made up of eight districts which are: Sicuani, Checacupe, Combapata, Marangani, Pitumarca, San Pablo, San Pedro and Tinta. The city of Sicuani is the capital of the province.

The province is largely crossed by the Vilcanota River. There are many mountains that cross it. These are part of the so-called Cordillera del Vilcanota, at the top of which stands the snowy Ausangate (the highest in Cusco at 6,384 meters above sea level).

The province was founded in 1833. In 1834, the city of Sicuani was designated as its capital. Its main tourist attractions are: the colonial bridge of Checacupe, the archaeological site of Raqchi, the red river, the mountain of Palcoyo, the red valley of Pitumarca and, of course, the mountain of the 7 colors (the Vinicunca).

Sicuani, the capital of the province of Canchis, is located 137 kilometers by road from the city of Cusco. It is located south of the Cusco region, in the eastern part of the Andes Mountains. The province has an average altitude of 3,548 meters above sea level

To get to Sicuani (capital of the province) from the city of Cusco, you must take a public transport bus from Huayruropata street. The trip costs 15 Peruvian soles (approximately 5 US dollars).

The Canchis were an ethnic group made up of seven peoples who settled in the south of Cusco parallel to the Incas in the 14th and 15th centuries. They are credited with building important temples, citadels, and fortresses such as Waqrapukara.

During the wars between the Incas and the Chancas in the 15th century, the Incas requested the support of the Canchis. Thus an alliance was formed that would prosper during the conformation of the empire of the Incas. So the Canchis territory was part of the 'Collasuyo'.

At the beginning of the 21st century, the mountain of 7 colors, also called Vinicunca, was discovered in the foothills near the snowy Ausangate. Today this place is the main tourist attraction of Canchis.

These are the main tourist attractions in the province of Canchis:

The climate in the province of Canchis varies according to each district. However, in most towns there is a cold temperate climate that varies from 22ºC. maximum up to 0ºC. at least.

The rains can occur on any day of the year. However, they are more frequent from November to April. The dry season occurs from May to October. In June, July and August the coldest temperatures of the year are presented.

The province of Canchis is famous for the beautiful Andean landscapes it offers. There are dozens of lagoons of great beauty. Highlights: the blue lagoon, the Mejía lagoon, the Llanganuco lagoon, the Choclococha lagoon and more.

A large part of the population of Canchis still speaks Quechua, the language they inherited from their Inca ancestors. Its squares still show colonial Catholic temples. Many of its customs and cultural aspects come from the same Inca era and have important influences from Spanish colonialism.

The characteristic flora and fauna of Canchis is the one that gets used to the Andean mountains. Highlights include icchu (wild mountain straw), llamas, alpacas, vizcachas and even the famous Andean condor.

This province is famous for the archaeological sites of Tipón and Piquillacta but also for Andahuaylillas, Oropesa, Huasao and the Qoylluriti festival.