The province of Canas

Canas is one of the thirteen provinces that make up the department of Cusco. It is famous for historical events that happened there such as the Túpac Amaru II Revolution. It is also famous for hosting the Queswachaka bridge, considered the last Inca suspension bridge. To get there you must travel 156 kilometers by road from the city of Cusco. Learn more about this historic province of Peru.

All about the province of Canas

Explore the province of Canas

In the province of Canas you can visit incredible Andean landscapes. Also towns with a lot of history and tradition. One of these is the town of Quehue where the famous Inca bridge of Queswachaka is located. Learn more! 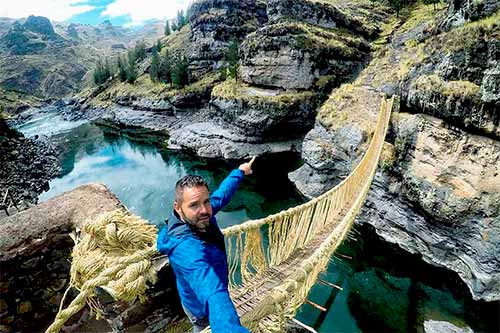 Qeswachaka in Cusco, Peru is the last Inca suspension bridge. Thanks to the renewal ceremony it is still valid. It is the Cultural Heritage of the Nation.

The province of Canas in Cusco

The province of Canas is one of the oldest created in Cusco since it dates back to 1834. It has a history marked by the presence of the 'canas', the Incas, the Spanish and, one of its most important chapters, the Tupac Amaru II revolution.

As a trace of its history, today there are archaeological sites, colonial churches, traditions and other vestiges such as the famous Queswachaka Bridge, considered the last Inca suspension bridge. This town is in the district of Quehue.

The province covers a territorial extension of 32,484 inhabitants. It has a population of 38,293 people, according to the official 2007 census. The most widely spoken languages ​​are Spanish and Quechua (the language of the Incas).

Where is it located?

Geographically, the province is in a mountainous territory marked by the Apurimac River. At the foot of the Yana Khuchilla, Chimboya and Kunka mountains, the Langui lagoon is immense. On the north side, the Tungasuca lagoon stands out. Yanaoca, the capital of the province, is located at 3,913 meters above sea level.

To get to Yanaoca, the capital of the province of Canas, you must follow the following route:

Canas is known as the 'Cradle of American Emancipation' because it was there that the great Revolution of Túpac Amaru II (from 1780 AD to 1783 AD) began to take shape. However, its history goes back a long way. This area was inhabited by the Kanas, an ethnic group that ended up allying with the Incas. According to the chronicler Cieza de León, the Inca Wiracocha was the one who managed to expand his territory through the region of the 'Kanas' and its neighbors 'Kanchis'. The Inca presence left several traces to this day. The best example is the Queswachaka suspension bridge.

The arrival of the Spanish and the establishment of colonialism in the 16th century caused a radical change in the territory of the Canas. The descendants of the Incas were affected by the new Spanish tax system. That is why the revolution of the curaca José Gabriel Condorcanqui (born in the town of Surinama) was born in 1780. Finally Túpac Amaru II was executed in the Plaza de Armas of Cusco in 1781.

During the republican era, the current provinces of Canas, Canchis and Espinar were part of the former province of Tinta created in 1825 by decree of Simón Bolívar. The province of Canas was created on August 13, 1834. Today the province of Canas is made up of more than 30,000 inhabitants, the majority dedicated to agriculture and livestock. Many aspects of the Inca culture remain alive today. For example, the Quechua language and the Inca bridge of Queswachaka, its main tourist attraction.

Tourist attractions in the area

These are the main tourist attractions in the province of Canas:

More information about the province of Canas

The most famous thermal baths in the province of Canas are in the town of Layo (called Exaltación thermal baths).

One of the most amazing traditions in the province is the 'Chiriaje'. This ritual pits two communities in the Langui district against each other. At the tip of stones and huaracazos a winning community is achieved, which will have better omens in the year.

The most famous archaeological sites in the province are the 'Machu Pucara', the 'Machu Llacta' and the ruins of Qora Pucara. These were used by the Incas and even cultures before them.

The province of Paucartambo is famous for the festival of the Virgen del Carmen (July 16). Also by the viewpoint of Tres Cruces de Oro, Kosñipata and more.