The province of Anta

Anta is one of the thirteen provinces belonging to the department of Cusco. It is located northwest of the city of Cusco. It has an area of ​​1876 square kilometers. It has nine districts. Its capital is the district of Anta. Its main tourist attractions are: the Chonta viewpoint and the Humantay lagoon. This last place is one of the most visited natural landscapes in Cusco.

All about the province of Anta

Explore the province of Anta

Anta is one of the provinces of Cusco with the longest history. There are various tourist attractions to visit. However, definitely the most famous is the Humantay lagoon, one of the most beautiful landscapes in Cusco. Learn more! 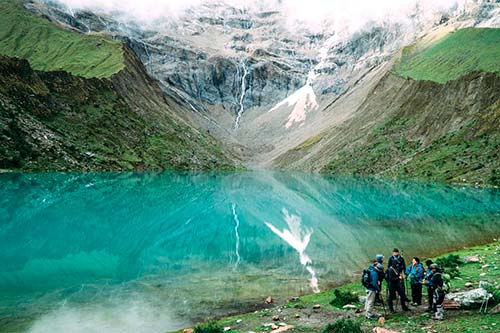 The Humantay lagoon is one of the best attractions in Peru along with Machu Picchu. How much? What to bring Location, climate, height and more information.

The province of Anta

The province covers an area of ​​1,876 square kilometers where some 56,206 inhabitants live according to an official 2017 census.

Anta has a territory of Andean valleys marked by the proximity of the Salkantay mountain, the Apurímac river and the Choquequirao Regional Conservation Area.

The main tourist attractions in the province are the Chonta viewpoint, the snowy Salkantay and the Humantay lagoon. The latter is one of the landscapes most visited by tourists who come to Cusco.

Where is it located?

Anta, the capital of the province of the same name, is located 25 kilometers by road from the city of Cusco. This district is 3,377 meters above sea level.

Anta has a territory of Andean valleys marked by the proximity of the Salkantay mountain, the Apurímac river and the Choquequirao Regional Conservation Area.

To get to the district of Anta (capital of the province) you can follow the following route:

The first inhabitants of this region of Cusco were ethnic groups (isolated groups of families) such as the Guallas, the Poques, the Antasayc, the Sahuasiras and the Lares. According to the Peruvian historian María Rostworowski, at the time of the Inca conquest of this territory, the 'Sayacmarcas' were the most important ethnic group.

Probably in the fifteenth century the Incas conquered the Ayacmarcas. Evidence of the Incas passing through the territory is visible in current archaeological sites such as the Tarahuasi Palace (current Limatambo) as well as in the ruins of Choquechurco and Chinchaypucyo (both in Mollepata). It was in these territories where the Incas fought their fervent rivals the Chancas and sealed the expansion and creation of the Tahuantinsuyo (Empire of the Incas).

During the colonial era some religious temples were built in the 'indian reductions', the future districts of the province. For example, the church of Mollepata stands out, where the Lord of Exaltation is found. Already in the republican era, the province of Anta was created on November 19, 1839 under the presidency of Agustín Gamarra. Today it is one of the most touristic provinces. The main reason is the presence of the Humantay lagoon in the district of Mollepata.

These are the most famous tourist attractions in the province of Anta:

In general terms, the province of Anta has a temperate climate that varies according to the district and the altitude in which it is geographically located.

The district of Anta, the capital of the province, has a temperature that varies from a maximum of 24ºC. in the day and a minimum of 3ºC. at night. The rains are more intense from November to April. Less rain occurs from May to October, but the cold is more intense at night.

In the Anta district you can visit the Chacán lagoon, the Yungaqui waterfalls, the Pancarhuaylla petroglyphs as well as the archaeological remains of Uskhuray.

In the district of Cachimayo you can visit the caves of Cuncuya (also called the 'Hideout of Mateo Pumacahua'). There the Incas probably performed religious rituals. In this district you can also visit the ruins of Mucka Rumi' and the archaeological complex of Qenqo Wasi.

In Anta there are several patron saint festivities where the tradition and culture of its peoples are appreciated. Some of the most important festivals are: The Cruz Velacuy festival (May 3 in Izcuchaca), the Lord of Exaltation festival (September 14 in Inquilpata), the festival in honor of the Asunta Virgin (September 15, August in Limatambo) and more.