The province of Acomayo offers various tourist options to visitors. Perhaps one of the most famous is the Waqrapukara fortress, a formidable Inca citadel located on top of an almost inaccessible mountain. It also offers incredible landscapes through the new circuit of the 4 lagoons. The tour of these lagoons also allows you to observe the diversity of Andean flora and fauna. Learn more about this province of Cusco, its main data and tourist attractions.

All about the province of Acomayo

Explore the province of Acomayo

Acomayo is one of the provinces of Cusco recognized for tourist attractions such as the archaeological site of Waqrapukara or the circuit of the 4 lagoons. Discover these and other attractions of this province. 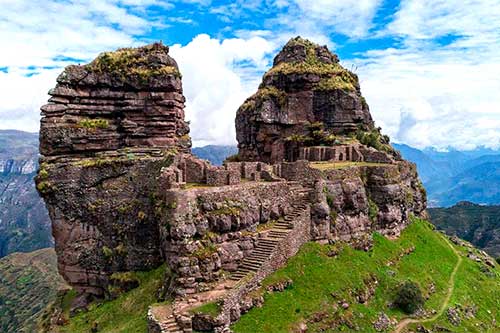 The Inca fortress of Waqrapukara is one of the newest new tourist destinations of Cusco in Peru. The tour includes a hike through mountains and lagoons.

The first, Acomayo, is the capital of the province. It is located 125 kilometers by road from the city of Cusco. The province is home to important tourist attractions such as: the Inca site of Waqrapukara, the circuit of the four lagoons, colonial bridges and more.

The province has a population of approximately 27,284 people. It spans 908.22 square kilometers.

Its name comes from a compound Quechua word that means 'River of sand'. This is due to the presence of important water tributaries such as the Apurímac River or the Pomacanchi Lagoon.

The province of Acomayo is located southeast of Cusco. It covers an area that includes the Apurimac River and the Vilcanota Mountain Range (from the Pacsacocha Lagoon to the Quehuar River).

It has a mountainous geography close to lagoons and snow-capped peaks such as Hatun Urqu and Maranniyuq. The district of Acomayo, capital of the province, reaches 3,207 meters above sea level.

Map of the province of Acomayo

The history of the province of Acomayo dates back to pre-Inca times. The first settlers of this region were the 'canchis'. Later, at the end of the 15th century, the Canchis allied themselves with the Incas to fight their Chanca enemies. It is around that time that the Incas took over the Waqrapukara temple to remodel it using aspects of its architecture. Some chronicles indicate that important religious rituals were performed in the Pomacanchi lagoon.

Already in colonial times, Acomayo was part of the so-called 'Party of Quispicanchi'. The main activity was agriculture and livestock. Much of its population participated in the great rebellion launched by José Gabriel Condorcanqui, called Túpac Amaru II. After Peru's declaration of independence in 1821, Acomayo was reduced to a single province. Its declaration and foundation took place on February 23, 1825 under a decree ordered by the liberator Simón Bolívar.

Today the province of Acomayo has 7 districts. Its population is mainly dedicated to agriculture and livestock. Tourism is mainly promoted by the archaeological site of Waqrapukara. It also stands out for the Circuit of the 4 lagoons, the church of San Jerónimo (in Acopia), the Temple of San Miguel Arcángel (in Acos), the Wayky viewpoint (in Acos) and the colonial bridges (in Pomacanchi).

Waqrapukara – This Inca archaeological site was a temple located on the top of a mountain in the shape of a horn (or ears of a llama). Its origin dates back to the time of the canchis culture. It has enclosures, squares, paths, stairways, temples and more. To visit it you must take a walk of almost 3 hours.

Circuit of the 4 lagoons – This tourist circuit is made up of the Pomacanchi, Acopia, Asnacocha and Pampamarca lagoons. The local inhabitants conditioned the lagoons with boats, viewpoints as well as the sale of snacks and drinks. The visit can be made with a tour or on your own. The entire tour can take 3 hours.

The Temple of San Miguel Arcángel – This temple is located in the town of Acos and stands out for the festivities it receives. The most important are the festival of the Virgin of the Nativity (which includes bullfights) and more. Acos is located 134 kilometers by road from the city of Cusco.

The Wayky viewpoint – 15 kilometers from the district of Acomayo is the Wayky viewpoint from where there are impressive views of the towns of Acos, Pilpinto, Acomayo and the mountain ranges of the Andes Mountains. Wayky is a Quechua word that means 'brother'.

The colonial bridges – In the town of Pomacanchi you can see up to fifteen colonial bridges made of stone and alicanto. In this same town you can visit mills that account for the important economic activity in Acomayo.

Acomayo has a temperate climate with minimum temperatures of 4ºC. and maximum of 24ºC. The rainiest months are January, February and March. The months with less rain are June, July and August.

The most important festivity in Pomacanchi is the one held in honor of the Virgin of the Immaculate Conception on December 8. Also noteworthy is the festival in honor of the patron saint of San Agustín, on August 28 and 29. In these festivities, the groups of dancers, musical troupes and gastronomic fairs stand out.

In the Pomacanchi lagoon and the other lagoons in the province it is possible to observe wild ducks, seagulls, white herons and other birds. In its waters there are pejerreyes and trout. The landscapes they offer are some of the best of the trip to Cusco.

In Acomayo and all of Cusco it can rain at any time. For this reason, an umbrella or rain poncho should not be missing in your travel bag. During the day the heat is intense so you should wear a hat, sunscreen as well as snacks and rehydrating drinks.

In Acomayo there are no quality tourist services such as restaurants, hotels, bars and more. Therefore, if you are visiting on your own, do not forget to bring cash with you. The main businesses of the place do not accept credit or debit cards.