The town of Santa Teresa is famous for its Cocalmayo thermal baths, considered the best in Cusco. Also because it is an obligatory route when you want to go to Machu Picchu through the adventurous route of 'Hidroeléctrica'. It also offers adventure sports. Its climate is one of the hottest in the region as it is found in the high jungle of Peru. There are many tourists who are enchanted with this town during their visit to Machupicchu.

All about Santa Teresa

Santa Teresa is a small town in the jungle of Cusco. There you can enjoy one of the best thermal baths in the region and many more adventures. 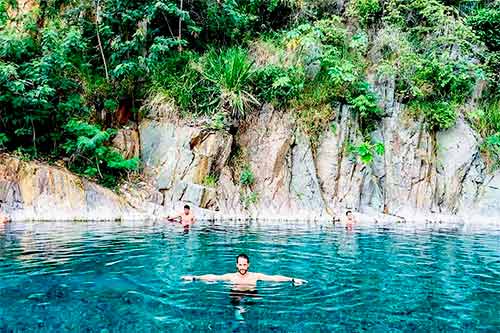 These baths have up to 4 pools. It is in the town of Santa Teresa, just 8.5 kilometers from Machu Picchu. They are considered the best in Cusco.

What is Santa Teresa?

Santa Teresa is a small town in Cusco famous for its thermal baths and for being part of the alternative road to Machu Picchu known as the 'Hidroeléctrica' route. This town is characterized by its hot climate and its coffee, pineapple, banana and other fruit plantations.

Where it is located?

The town of Santa Teresa is located in the jungle part of the Cusco region. It is 203 kilometers by road from the city of Cusco. It is also only 6.5 kilometers as the crow flies towards Machu Picchu.

At what altitude is it?

History of the town of Santa Teresa

The area of ​​Santa Teresa was populated by dispersed human groups until it was annexed to the empire of the Incas in the 15th century. During the Inca period their lands were an important source of agricultural products, especially the coca leaf, considered sacred by the Incas. Due to its privileged location near Machu Picchu, it must have enjoyed singular importance.

Then, during the arrival of the Spanish to Cusco in 1533, Santa Teresa was one of the escape routes for the rebellious Incas led by Manco Inca who would later settle in Vilcabamba, in the thick jungle of Cusco. Finally, he was part of the viceroyalty of Peru. Its mountains were exploited for their mineral wealth. As proof of this are the abandoned mines of Victoria, located in the sector of the towns of Yanama and Totora at the top of the town of Santa Teresa.

As of the independence of Peru, the inhabitants of Santa Teresa dedicated themselves in their majority to the agricultural activity. This town was one of the most combative for the expulsion of the great landowners, the so-called 'agrarian reform'. In 1957 it is named a district. Due to its location near a river, the town was razed by a huaico in 1998. Thus, the town had to be removed several meters higher. It is famous for its Cocalmayo thermal baths and for being part of the route that leads to Machu Picchu. For this reason, it currently has a good offer of accommodation and restaurants for the tourist service.

The thermal baths of Cocalmayo

The thermal baths of Cocalmayo, in the town of Santa Teresa, are considered the best in Cusco. Its waters, unlike most thermal baths in the region, are clear. Temperatures vary from 38ºC. (100.4ºF). up to 44ºC. (111 ° F). The place has up to 3 large pools. There are also changing rooms, cold showers, cafeterias and even lodgings. You can get there walking or taking a taxi from the town of Santa Teresa. The cost of entry for foreigners is 10 Peruvian soles (approximately 3 US dollars).

The town of Santa Teresa has several thermal baths where you can relax. For example, there are the Ccolpani thermal baths, the Urpipata baths, the Quellomayo baths and, finally, the Cocalmayo baths. The latter are the famous and recommended for tourists as it has more welcoming facilities. Unlike the others, Cocalmayo does have a cost of entry.

The archaeological complex of Choquequirao is an immense Inca citadel built on top of a rugged territory difficult to reach. It belongs to the district of Santa Teresa, although to get from there you still have to go by car and walk for several more kilometers. This Inca complex is known as the 'Sacred Sister of Machu Picchu' for its resemblance to the famous Inca city. The best way to go is by hiring a tour of 4 days and 3 nights. These tours do not follow the route through Santa Teresa, but rather a different route that begins in the town of Cachora, south of Cusco.

In Santa Teresa there is a recreational center where you can practice some adventure sports such as the zip line. The place has different types of zip lines located 150 meters above the ground with descending distances of up to 3.5 kilometers. The descent through these ropes stands out for the beautiful landscapes that surround it. Another of the adventurous alternatives is to cross a suspension bridge over several meters high. You can even go rock climbing. All adventure sports are carried out through an organized service that includes safety equipment.

The route to Machu Picchu through Santa Teresa

Santa Teresa is part of the alternative route to Machu Picchu by 'Hidroeléctrica'. On a daily basis, many visitors decide not to take the train from Ollantaytambo but to take a longer route that includes a 10-kilometer walk from the 'Hidroeléctrica' train station to the town of Aguas Calientes. This route crosses the town of Santa Teresa (located just 10 kilometers from the Hydroelectric station). Most visitors stop in town to provide themselves with food.

The few tours to Santa Teresa are those that include the visit to Machu Picchu within a trip of 2 days and 1 night. These tour packages go through this beautiful town for lunch and a break before continuing with the walk to the town of Aguas Calientes. The cost of this tour is approximately 200 US dollars per person.

How to go on your own? How much?

To go to Santa Teresa on your own, you just have to take one of the public transport buses that depart daily from the bus station on 'Avenida Antonio Lorena'. EThe cost of the trip is approximately 15 Peruvian soles (5 US dollars). After 5 hours of travel, the visitor must get off in the town of Santa María. There you must board a collective taxi (cost of 3 American dollars) to the town of Santa Teresa, after 1 hour of travel.

Once in Santa Teresa you can tour this town. Definitely, a great option is to visit the thermal baths of Cocalmayo, where you can walk or take a taxi. The cost of entering the thermal baths is 10 Peruvian soles (3 US dollars).

Every October 11, the town of Santa Teresa celebrates the festival in honor of its anniversary. In those days, gastronomic fairs, dances, music shows and, above all, the general hubbub of its inhabitants are common.

Just 10 kilometers from Santa Teresa is the Hidroeléctrica train station. The cost of the trip to Aguas Calientes (Machupicchu town) for the local population is only 5 Peruvian soles (2 US dollars). Tourists pay a much higher rate in US dollars. That is why most tourists prefer to walk (10 kilometers of roads in approximately 2 hours on foot).

The best time of year to visit Santa Teresa is from April to December. The months of January, February and March have heavy rains (especially February). On those days it is risky to walk and travel its roads since landslides or huaicos can occur.

In Santa Teresa it is not common to feel the symptoms of altitude sickness since its geography is tropical. However, it is important to bring a cap or hat with you, as well as sunscreen and mosquito repellent. In these geographies the sun can damage the skin.

Chinchero is famous for its archaeological site (Túpac Yupanqui Palace). The town stands out for its customs, textile centers, church and clothing.